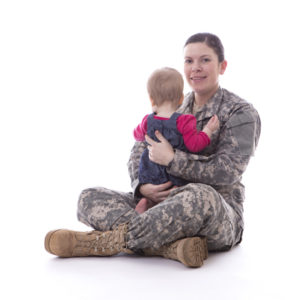 Military service members are stationed throughout areas of the country, and around the world, that often are far from “home.” Yet, the reality of divorce and disputes involving minor children affect many service members regardless of where he or she is stationed and within all the different branches of the armed forces. Legal matters involving divorce and children are governed by state laws, more specifically the state which has jurisdiction over the divorce and/or children. This is regardless of if you, as a service member, have no ties to the State except for your military service.

For example, North Carolina is likely to have jurisdiction over your children if you and your children are stationed and have resided at Fort Bragg for at least six (6) months prior to the filing of any child custody action, even if your entire family is originally from Virginia. As a result, a service member may have to deal with very personal and private issues by the application of laws of a state that is not associated with the place they have previously called “home”. More specifically, the law of the state which has jurisdiction over your divorce and/or dispute involving children will also have the final decision-making authority to determine the issues accompanied with property division incident to divorce, spousal support issues, child custody issues, child support calculations, and possibly even the actual divorce.

Every active duty member of the armed forces has a military imposed obligation to provide financial support to dependents.* This obligation is separate from, and in addition to, the state-mandated obligation that each parent has a duty to financially support his or her minor children. The military financial obligation generally controls as soon as the parents separate and is applied in the absence of a formal Agreement or Court Order that establishes the applicable spousal support, if any, and child support amounts pursuant to the family laws of the appropriate state. These military imposed financial obligations differ from branch to branch.

To illustrate, the Army and Marine Corps provide specific formulas to determine a numerical amount of familial support. The manner of enforcement of the familial support regulations also differs from branch to branch. In any branch though, a service member’s Commanding Officer is not authorized to garnish wages or otherwise obtain possession of the service member’s pay to force payment to the dependent party.

Although a valuable resource, familial support imposed as a military obligation involves a completely separate process from resolving the other matters that may arise in a family law matter with a military family.

In North Carolina, there are two forms of spousal support established by statute: Post-separation Support and Alimony. Post-Separation Support is considered temporary financial support for a spouse while Alimony may extend for a longer duration. For both forms of spousal support, North Carolina does not have a calculator. Rather, the Court will take into consideration a number of factors to include the incomes of each party, the ability to work, each party’s standard of living, and the financial obligations of each party. Because there is no true mathematic calculation provided by statute, the exact amount awarded, if any, is on a case-by-case basis and may also be impacted by the specific judge that makes the determination after weighing all of the factors.

North Carolina has historically put the needs of military service members, especially in child custody disputes, at the forefront of many laws and state policies. In fact, in 2013, the Uniform Deployed Parents Custody and Visitation Act (the “Act”) was adopted. Among other things, the Act provides for specific remedies that accompany the deployment of a parent.

The Act imposes additional obligations as well as additional remedies available to military parents should a deployment be ordered. A deploying parent must notify the other parent of the pending deployment no later than seven days after receiving the notice of deployment unless unique circumstances apply. In light of the impending deployment, the parents may enter into a “temporary parenting agreement” that grants custodial responsibility during the deployment. The agreement must be in writing and be signed by both parents and any non-parent who will have custodial responsibility as a result of the agreement, if appropriate. It is best not to rely on texts, emails, or handwritten notes.

Although the temporary parenting agreement can include any provisions that the parents desire, some of the most important provisions include how the deploying parent will maintain contact with the child and when the agreement terminates following the deploying parent’s return from deployment. The nature of this type of agreement falls under separate legal authority than a temporary custody arrangement established in a non-deployment or civilian situation. It is important to note that a non-parent in this agreement does not have an independent, continuing right to caretaking authority, decision-making authority, or limited contact with the child simply because the agreement had established temporary custodial responsibility with the non-parent. It is also preferable to make sure that this agreement is written by an attorney to ensure the proper legal authority and statutes are cited. Although a parenting agreement is not required to be filed with a Court, an attorney can explain the benefits of filing the agreement with a Court for ease of enforcement. A parenting agreement can also be established and entered with the Court regardless of separation of the parents should they be married.

In light of differences between parents battling over custody, it is often likely that parents may not be able to come to an agreement. In these instances, a service member may be able to get an expedited hearing on the issue of temporary custody before deploying. If a hearing is not possible, then the Court may still be forced to have a hearing during deployment; however, a Court may not at any point issue a permanent order granting custody in the absence of a deploying parent without his or her consent. The Act further permits that should a hearing occur during deployment, testimony by a witness, including the deployed parent, could occur by electronic means. In a hearing involving deployment of one parent and on the motion of the deploying parent, the Court has the ability to grant child caretaking authority to a non-parent who has a close and substantial relationship with the child.

Finally, depending primarily on the parenting arrangement and the incomes of both parties, on a temporary or permanent basis, the Court will follow the North Carolina Child Support Guidelines that calculates the amount of a child support obligation. An attorney can assist in the determining the child support calculation depending on a family’s specific circumstances.

If you are involved in a military divorce or dispute involving children, please ensure that you contact the attorneys at Sodoma Law to become informed about the unique laws and regulations that apply to your situation. Call us at 704-442-0000 to schedule a consultation.