What if you could pay child support in pizza in lieu of money? 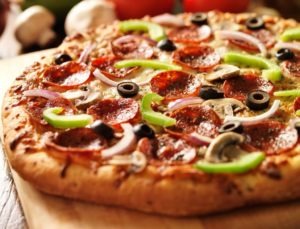 This spring, a court in Italy ruled that a financially strapped chef can pay child support in the form of pizza in lieu of money.

In 2002, the chef was ordered to pay $335.00 per month in child support, which he did until 2008, when the chef fell on hard times and could not afford to continue the payments. He instead provided the monetary amount in the form of pizzas, calzones, and other delectable treats. While at first the ex-wife agreed with the unusual payment plan, she became unhappy with the arrangement. In 2010, she became completely fed up and took her ex-husband to court criminally for nonpayment of child support. The Court held that he did the best he could under the circumstances and no crime was committed.

While this story might make us chuckle, anyone going through determination of child support knows it’s no laughing matter for the families involved. The more you know going into the courtroom, the better prepared you are to make sure the final determination of support will meet the needs of your children while also taking into consideration each party’s income.

How is Child Support Determined?

Generally speaking, child support is paid by one party to the other for the support of the minor child(ren). Each state has different laws on how they calculate child support, most using a calculator of some sort to determine the “presumptive child support.” States generally use one of three approaches in determining the basis for a child support award*:

• Income Shares Model: A concept that a child should receive the same proportion of parental income had the parties stayed together. The majority of states use this model.
• Percentage of Income Model: Where one only uses the noncustodial’s income in determining an appropriate award, not the custodial parent’s income. There are also two variations to this model. The following states use this general model: Alaska, Arkansas, Illinois, Mississippi, Nevada, North Dakota, Texas, Wisconsin.
• Melson Formula: This formula is more case by case specific. It includes a hybrid of the income shares model but also incorporates fluctuating standards to make sure the parent’s basic needs as well as the children’s needs are met. Delaware, Hawaii and Montana use this approach.

Based on the model used – for example, the Income Shares Model includes the parties’ gross incomes, as well as various “credits” for the children’s expenses – an amount is calculated and determined as the presumptive amount. As seen above, in most models, the amount does not generally take into account all the unique factors of an individual case. It is a one size fits all calculator, or one pie fits all, as in the pizza case.

What do you do then, when the amount dictated by your state’s calculator is providing more than 70% of your pie to the other parent, such that you are not even left with one slice for your own family?

First: remember that the guidelines of each state are meant to be that, guidelines. There is room for negotiation as courts realize that while one individual may be the owner of a successful business and can pay the presumptive amount, the other may be a failing pizza baker with too many mouths to feed. There may be an opportunity to stray from this guideline amount, which, in North Carolina (where my firm, Sodoma Law, is based), is called a “deviation” from the guideline amount either by filing the appropriate Motion with the Court or resolving the issue directly with the other parent (as the parties above did and were able to agree-at least for a short while.)

Child Support Deviation in North Carolina means that one looks to the reasonable needs and expenses of the children as well as looking at the parties’ ability to pay. Each party completes affidavits setting forth all expenses. The parties can either agree on a child support amount or the Judge may use the affidavits to determine what he/she believes the reasonable amount to be, deviating from the guideline amount if he/she deems it appropriate.

The key here is to look at reasonable needs and expenses in coming to terms with an amount, understanding that child support may be modified if certain circumstances arise.

And, “reasonable” means getting to the heart of the matter and really figuring out the children’s expenses. Consider everything from Target runs, prescription and over the counter medications, doctor visits, clothing and even holiday gifts.

The takeaway: While the courts each have their own ways to determine a baseline for a child support calculation, depending on your state, if the case warrants it or if the parties agree, there are ways in which the parties can stray from the guideline amount so that each can maintain their own slice of the pie.