If You Don’t Have Anything Nice To Say, Don’t Post it on Social Media 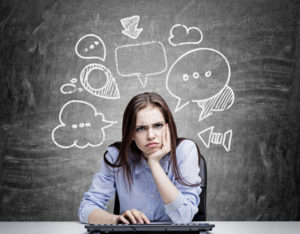 The use of social media has impacted and changed many of our day-to-day lives. Did you know there are approximately 2.2 billion social media users in the entire world*? Actually, most of you reading this article probably have at least one of these accounts. Social media includes social networks and forums such as Facebook, Instagram, and Twitter. Think about how many times a day you browse and scroll through your social media accounts. For some of us it is several times per day, and for most of us it is probably more than we would like to admit. In the last ten years or so, social media has changed more than our private lives; it has also had a significant impact on the area of family law. Given the “social” nature of social media, what you post or share on your accounts can end up being used against you in your custody, child support, and/or alimony case.

The widespread use of home computers and the emergence of apps directly on your phone make it easier than ever for you to get almost instantaneous access to see, and share, personal information between you and your friends or followers. The first part of this two-part article focuses on social media posts as it relates to your custody case. While this article is meant to inform you about common pitfalls and mistakes that can negatively affect your custody case through the use of social media, it is also a reminder for all parties that you never know when someone is watching what you post.

Most family law attorneys would agree that custody can be one of the most emotionally-charged aspects of family law. After all, nothing is more personal to a parent than their kids. In the event you and your ex cannot agree on the custody schedule and other issues surrounding children, you may end up in the courtroom where a judge will decide for you what custody of your children will look like. This could include a variety of outcomes, one parent may have primary physical custody while one has visitation rights (or secondary physical custody), or you may end up with a joint custody schedule. Under North Carolina statute and case law, the judge is mandated to do what he or she believes is in the child’s best interest and can put any schedule in place that appears best for the children based on the evidence and testimony presented. How each parent behaves will play a significant role in that decision.

While we all love sharing our thoughts, feelings, and activities with our family, friends, and followers, it is important to think very hard about whether anything you post can be used against you or taken in a negative manner during your custody case before you post it.

Join us for part two of this blog soon! We will focus on the effect social media may have on the financial and property issues in your case. In the meantime, just remember – if you can’t say something nice, it’s probably not worth saying on social media while you wait for your day in court.

If you follow the above steps, before you know it, you will have the first meeting under you belt. You should now be feeling educated and empowered about choosing independence, and choosing if divorce is right for you. If you are considering separation or divorce contact Sodoma Law by phone 704.442.0000 or by e-mail attorney@sodomalaw.com to talk with an attorney and set up your initial consultation.

*statista.com compiles data and statistics from thousands of sources.