4 Reasons you may not want to Sign a Prenup 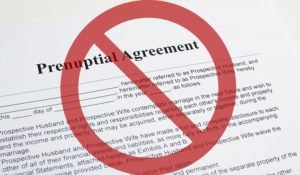 A prenup is worth considering for several reasons. After all, it helps manage expectations of what happens during and after a divorce.

Without one, state divorce laws will help determine what happens to assets in the event of a spousal split. That may be the case for Jeff Bezos, who recently announced that he and his wife, MacKenzie Bezos, are divorcing. The Bezoses reportedly did not sign a prenup, leaving his $137 billion fortune subject to Washington state’s community property laws.

Despite several benefits, prenups aren’t for everybody. We spoke to the experts to find out how to determine if a prenup isn’t for you.

1. If you can’t afford to hire a competent attorney.

Sometimes, you get what you pay for. You shouldn’t settle for an attorney merely because they’re your most affordable option — you might not get quality services.

“A well-drafted prenup can protect assets, liabilities, and incomes; however, a poorly drafted prenup may do more harm than good,” Theresa Viera, family law attorney with Sodoma Law, told Business Insider. “It’s important to remember that each party must hire their own attorney to represent him or her as their interests may be different.”

The cost of a prenup is typically $2,500, according to US News & World Report. But that can differ depending on where you live. In places with a higher cost of living, like major urban cities, it’s likely that you’ll have to pay more for a prenup.

If you don’t have the funds for competent counsel and would prefer to put money toward the wedding and honeymoon, then a prenup may not be for you, Kelly Frawley and Emily Pollock, partners in the Matrimonial and Family Law Department at Kasowitz Benson Torres LLP, told Business Insider.

2. If you want the laws of your state to apply in the event of a divorce.

For example, she said, “Some states have laws that ensure both spouses can keep as separate property any property owned prior to the date of marriage.”

Ten states observe community property law, where a 50/50 split applies to your marital estate, Business Insider previously reported. The remaining states consider a marital estate to be comprised of assets under each spouse’s name — it’s only considered joint or community property if both names are on the deed. In this case, the judge determines how the assets are divided “fairly.”

Viera, Frawley, and Pollock all agree that if you trust you’ll still be residing in your state and the state laws are consistent with how you want your divorce to be handled, then you may not need a prenup.

3. If you and your partner don’t intend to add assets.

A prenup may not be necessary if you don’t intend to create an estate, increase incomes, or have children, Viera said.

“Before you are married, the two of you may think that you never want to buy real property, build retirement accounts, or have plans to create any other investments that you might want to protect,” she said. “Additionally, you may know that neither of you will desire to change employment, incomes, or even intend to have children or pets. If there is nothing to protect, then you do not need a prenup.”

On the flip side, not being able to predict the future could also be exactly why you shouldn’t get a prenup.

“Being committed at the time of divorce to an agreement that presupposes that one person will remain the monied spouse or that both parties will continue to contribute to the relationship in the same way may not make sense,” Frawley and Pollock said.

If things do change, that’s what a postnup is for.

“If someone wants to start a business with their family that they do not want to be a marital asset or someone wants to stop working during the marriage but wants some financial security for giving up future career prospects — the parties can always execute a postnuptial agreement if and when it makes sense to do so,” Frawley and Pollock said.

4. If you and your partner don’t believe in prenups.

If you and your partner “want to have an equal partnership and recognize each party’s contributions have value beyond their individual earnings,” then you may not need a prenup, Frawley and Pollock said.

“The sanctity of marriage may be such a strong moral and commitment that no one has ever divorced in your family or the family of your soon-to-be spouse,” Viera said. “You may truly believe that there is literally no probability of divorce in your relationship. If this is your belief and you know NO one that contributed to the divorce rate statistics, then ‘you do you.’ And that may mean that a prenup is simply not an option.”

But that doesn’t mean you shouldn’t talk about it.

As Viera puts it, “Regardless of whether you believe a prenup is a good or bad option, at the very least, having the conversation with your soon-to-be-spouse is crucial to ensure the two of you are on the same page.”